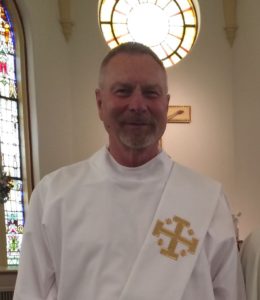 Deacon Charlie Roemer was ordained a deacon April 30, 2016. He had the full and very important support of his late wife, Linda, who passed away in 2019 after 51 years of marriage. Deacon Charlie has two children and two grandchildren. As a lay person he was involved in numerous ministries-visiting the sick, Eucharistic minister, lector, RCIA catechist, adult formation, etc.

He graduated from The Ohio College of Applied Sciences, Xavier University, and The Athenaeum of Ohio. Deacon Charlie served six years with the US Army reserves. During his working career he was employed by several foundries and manufacturing plants in the Cincinnati area. He retired from manufacturing after 48 years, as a Quality Assurance Manager, to concentrate on deacon formation studies.

Deacon Charlie says “Deacons are called to serve in a special way but I have always felt called to serve in many other ways – service to family, the Catholic Church, my country, and the community have all been part of my life’s work. I look forward to continuing to serve the priests and parishioners of Our Lady of the Valley.”