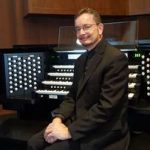 Trent Sims is a native of Dayton, Ohio. He developed a love of music at an early age and completed 10 years of intensive private study in organ performance and choral conducting with teachers in the Dayton area. During the course of his studies, he accepted his first professional position at a large downtown Dayton church as Organist/Director of Music when he was 18. A subsequent interest in the theater organ led him to accept staff organist positions at several music-themed pizza restaurants equipped with Wurlitzer pipe organs. Among those restaurants were the Cincinnati area based Springdale Music Palace and The Music Palace in Sharonville. As a concert organist, Trent has played classical and theater organ concerts across the United States, England and Germany. He plays regular concerts on the recently installed Wurlitzer pipe organ in the Ballroom at Cincinnati’s historic Music Hall and made the inaugural recording on that instrument in 2010. Trent continues to maintain an active concert schedule. His formal education includes an Associate’s Degree in Applied Science from Sinclair College in Dayton and a Bachelor’s Degree in Mortuary Science from the Cincinnati College of Mortuary Science. His hobbies include flying, classic cars and motorcycle riding.